. Bhupender
Bhupender
Published on- February 18, 2015, Updated on- February 18, 2015
TNEA 2015 Official Notification releasing by Anna University. Minimum Eligibility Criteria for TNEA 2015 Important dates of TNEA 2015 process / Events TNEA 2015 Proposed dates for 2015 Tamil Nadu Engineering Admission (TNEA) is the process through which close to 1.8 lakh engineering aspirants get themselves enrolled into engineering colleges of Tamil Nadu
TNEA 2015 Official Notification along with TNEA Eligibility Criteria 2015 and Important Dates were going to be released by Anna University.


Tamil Nadu Engineering Admission (TNEA) is the process through which close to 1.8 lakh engineering aspirants get themselves enrolled into engineering colleges of Tamil Nadu every year, through single window counselling process. Anna University has created a new official page for TNEA 2015.

Students who wish to appear for TNEA 2015 may now access the official page of Anna University. Kicking off its preparations for the Tamil Nadu Engineering Admission (TNEA), Anna University has decided to begin the printing of applications for placement in the 570 colleges in the State. The decision was taken at the Counselling Coordination Committee meet on Tuesday. The dates for the counselling session will be decided at the next meeting of the committee to be held at the end of March or the beginning of April after consultation with the Election Commission, the Department of School Education and the Directorate of Medical Education.

Minimum Eligibility Criteria for TNEA 2015
As per the official notification from the Anna University, find below the Eligibility criteria to apply for B.E / B.Tech Admissions . Those who would like to apply from other states are also here by given the necessary informations,

Eligibility General:
Candidates satisfying the following eligibility rules as on last date of submission of application are eligible to apply. Passing the qualifying examination or changing the religion etc. after this date shall not be considered.

Nativity :
Candidates belonging to Tamil Nadu only will be considered for admission. However, the following categories of candidates are also eligible to apply as Tamil Nadu candidate subject to certain conditions given below:

(C) Srilankan Tamil Refugee candidates studying in Tamil Nadu will be considered under open competition as per G.O. (St) No. 172 Higher Education (J2) Dept. dated: 29.06.2010. They have to enclose the following:

(i) Identification from Head Quarters Tahsildar
(ii) Those who have not registered in the refugee camp, they should submit passport and visa.

(D) Foreign Nationals are not eligible.

(b) Diploma
The candidate who have passed 10+3 Diploma (any stream) recognised by Central / State Governments.

When the candidates produce Grade certificates, they have to produce actual marks also otherwise only the minimum marks applicable to the grades in the eligible subjects will be taken into account. For the purpose of calculation of marks in respect of sandwich Diploma candidates, the marks of all the other semesters in which there is no industrial training shall be considered for the purpose of calculating the marks for eligibility. 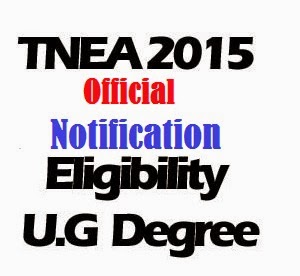