Telangana State Government is going to release the Notification for TS Ed.CET 2015 on 12 March 2015 which is declared on 4th March 2015 in Osmania University during the Meeting conducted by Telangana State Ed.CET Convener Prof. P. Prasad and he said, from this year B.Ed course duration will be extended to (2) Years. Now the candidates who want to do B.Ed, they can study B.Ed course (2) Years from 2015-16.

Engineering Students were also be eligible for appearing TS Ed.CET 2015, so as to get admission in to B.Ed course and they can study with Mathematics and General Science subjects. Telangana Ed.CET 2015 Examination Fee is fixed as Rs.300/- for General candidates and Rs.150/- for SC/ST candidates.

Candidates should have secured 50% marks either in the Bachelors Degree i.e. B.A./B.Sc/B.Sc (Home Science)/B.Com/BCA/BBM/B.Tech/BE/M.Tech and/or in the Masters Degree in the relevant subject or any other subject equivalent there to. However the candidates belonging to all other reserved categories should have secured a minimum of 40 % marks in the qualifying examination.
TS EDCET 2015 Time Table / Important Dates :

Candidates who wish to apply for Telangana Ed.CET-2015 are requested to fill the particulars carefully in ONLINE APPLICATION. The required information should be collected from the relevant documents. Candidates are requested to check the filled in particulars before pressing SUBMIT button DURING online application. If candidate wish to change, he/she can change selecting the EDIT button. After verifying and satisfying, submit the TELANGANA STATE EDCET 2015 ONLINE APPLICATION.


After submission of ONLINE APPLICATION, if any corrections are to be incorporated, candidate can login to the website with his details and modify the information.   If candidate wants to change the information which is not allowed on the website, candidate  has to submit their complaint selecting the "Submit  Complaint" in Help Desk provided on the Home Page. Data will be changed only if documentary evidence is satisfactory. HENCE, CANDIDATES ARE REQUESTED TO FILL THE ONLINE APPLICATION FORM CAREFULLY 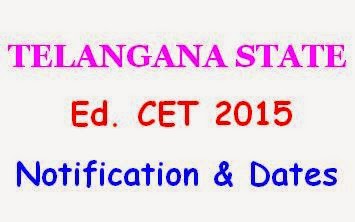