Rajasthan Pre Engineering Test (RPET) 2015 is going to be taken by Board of Technical Education, Rajasthan. RPET is conduct for (3) categories of candidates which are, RPET 2015 for Out of Rajasthan Candidates Thru JEE(Mains-2015) Score, RPET-2015 for B.Arch Admission thru NATA Score for B.Arch Course and RPET 2015 for Students

On line Applications are invited from eligible candidates of Rajasthan domicile including the wards of Kashmiri Migrants for the registration of Rajasthan Pre Engineering Test - 2015 for admission to first year of undergraduate programmes leading to Bachelor's degree in different disciplines of Engineering (B.Tech. / B.E.) in various Govt. aidedPrivate unaided technical institutions of Rajasthan (except BITS Pilani, MNIT Jaipur and other Deemed & Private Universities) for the session 2015-2016.

A candidate must ensure that he / she is eligible for admission to various Governments aided and private unaided technical institutions of Rajasthan (except BITS Pilani, MNIT Jaipur and other Deemed and Private Universities) before filling up the RPET-2015 Application Form. If a non-eligible candidate is admitted due to any reason then the admission of such a candidate will be cancelled as soon as the mistake is detected even at later stage. Various eligibility criteria for admission to B.Tech./B.E at http://www.rpetexam.com/.

The Council of Architecture has laid down the following academic qualifications for admission to 1st year of B. Arch courses. 10+2 or equivalent examination from a recognized Board with Mathematics as a subject of study by securing 50% marks in aggregate OR 10+3 diploma (any stream) recognized by Central/State Govt. with 50% aggregate marks OR International Baccalaureate Diploma, after 10 years of schooling with not less than 50% marks in aggregate and with Mathematics as compulsory subject of examination. 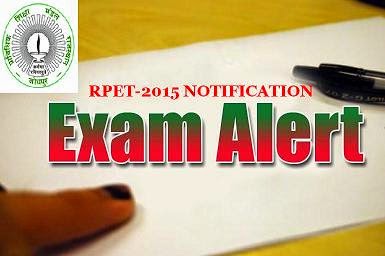