Andhra Pradesh Board of Intermediate Education (BIEAP) is releasing the AP Inter 1st Year Advanced Supplementary / Improvement Time Table 2015 for conduct of 1st Year and 2nd Year inter failed candidates along with who want to improve their marks should write the Improvement Examination are here by  released by the AP Inter Board. Already AP Inter 1st Year Results 2015 were announced on 23rd April 2015 and AP Inter 2nd Year Results 2015 were going to be announced on 30th April 2015.

At the time of the announcement of the Results Minister is told the Advanced Supplementary Details, as all know about that who watched the Live News on TV and also who are visiting frequently our website time to time, they are updated with this already.

The Board of Intermediate Education, Govt. of Andhra Pradesh has released Intermediate Advanced Supplementary Examination Schedule / Time Table 2015. According to the new schedule, the Advanced Supplementary Exams will be conducted in May 2015. The Practical examinations will commence also commenced in May 2015 and detailed Time Table will be available here after Board releases the Time Table Officially for AP IPASE 2015.

Last date for the submission of applications is also going to provided by the AP Inter Board soon. There has been so much confusion among the students and parents over improvement and supplementary examinations. Intermediate Second year qualified and failed students are undecided on the use of improvement for them in the context of EAMCET and other examinations. 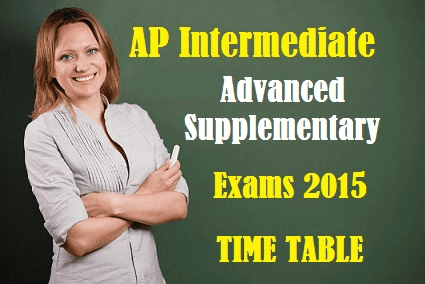