Karnataka CET 2015 candidates were allowed to keep a copy of their respective OMR answer sheet after each individual examination session under K CET 2015, and are advised to retain the answer sheets for at least one year. The answer keys can be checked on the official website. The KCET is held for students who wish to take admissions to undergraduate and professional courses of Medicine and Homeopathy in Karnataka. For the subjects Biolgy and Mathematics, the exam was conducted on 29 April whereas for Physics and Chemistry, the exam took place on 30 April across 29 districts and 52 centres in Karnataka.

The Karnataka CET 2015 scores can be used for admission to the following courses:


The admissions will be granted to candidates based on merit and rank secured in the Karnataka CET 2015. The admission counseling procedure will be held online only. The candidates can select as many courses as they desire subjected to eligibility. However, there will only be three rounds for seat allotment.

The KCET 2015 answer keys can be checked here: 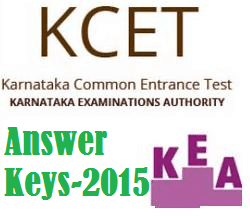