TS ECET Result 2017 has been declared by TSCHE for the Engineering Common Entrance Test and can be checked at tsecet.in. Telangana state ECET 2017 was held at various test centers designated for the purpose of conducting the examination for Diploma Holders and for B.Sc.(Mathematics) Degree Holders. Candidates can know the result of Telangana State ECET 2017 by entering branch (B.Sc / Engineering / Pharmacy) and hall ticket number in the TS ECET 2017 Results page.

The exam conducting body on behalf of TSCHE, generally declares ECET Results around 15 days after the exam. This year, the Telangana ECET Result 2017 has been published on May 20, 2017. AP ECET Result 2017 Candidates can know the result of TS ECET exam and download rank card at the official website tsecet.in. To check results, log in using hall ticket number and application ID. AP ECET 2017 Result has been declared by the Telangana State Council of Higher Education conducted that conducted the Engineering Common Entrance Test for Diploma Holders and for B.Sc. (Mathematics) Degree Holders.

Qualifying marks in TS ECET [FDH & B.Sc.(Mathematics)]- 2017 The qualifying percentage marks for obtaining a rank in TSECET 2017 is 25% of the aggregate marks in the four subjects (three subjects for B.Sc. Mathematics) i.e., 50 marks out of a total of 200. However, in the case of SC/ST candidates, there shall be no minimum qualifying marks for ranking the candidates. The rank obtained with the benefit of relaxation of the minimum qualifying marks at the TSECET [FDH & B.Sc.(Mathematics)]-2017 by any candidate claiming to belong to SC/ST category will be cancelled in case the claim is found to be invalid at the time of admission.

Candidates can now check their Rank of TS ECET 2017. Result has been already announced.

Every care will be taken to avoid errors in valuation, checking, scrutiny, tabulation and ranking. Hence request for re-totaling, revaluation or personal identification of scripts will in no case be entertained. 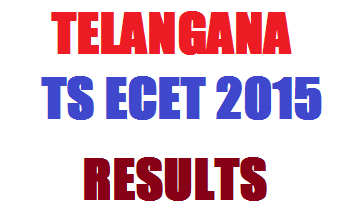