Admissions Notification has been released by Sainik School, Korukonda for Classes 6th & 9th for the academic year 2017-18. To prepare the boys academically, mentally and physically for entry into National Defence Academy, Khadakvasla.


Scholarships: Merit, Income based and Defence Scholarships are available to eligible students. The Social Welfare & Tribal Welfare Departments, Govt. of A.P. award scholarships to SC / ST boys whose parents‟ income is less than Rs.65,000/- per annum under "Bright Boys of Best Available Schools" Scheme. Free Education (Tuition Fees, Clothing Fees and Dietary Charges only) is offered on Merit-cum-Means basis for A.P. / Telangana domicile students from economically weaker sections of society and whose parental income is below Rs.2,000/- pm. It may be noted that all such scholarships are subject to adequate and timely release of funds from respective State Governments. Only one scholarship can be enjoyed by a student at any given time.


Approximate Vacancies: Class VI – 65 Class IX – 20 (including all Reservations of State / Other States / Union Territory). In case of non-availability of sufficient candidates in SC/ST Category vacancies, those will be filled by candidates from General Category.

Prospectus, Application Form and question paper of previous years can be obtained by post from “Principal, Sainik School, Korukonda”, Vizianagaram District, A.P – 535 214, on payment of Rs.475/- (Rupees Four Hundred and Seventy Five only)
or
Rs.325/- (Rupees Three Hundred and Twenty Five only in case of SC & ST) through DD drawn in favour of “Principal, Sainik School,Korukonda” payable at State Bank of India, Sainik School Korukonda Branch, CodeNo.2791. Payment through MO and IPO will not be accepted. Requisition for Prospectusshould clearly indicate Class for admission, Category (General / Defence / SC / ST) andMedium for Entrance Exam. Previous years‟ question papers will be made available only till
stocks last on additional payment of Rs.25/- (Rupees Twenty Five only) per set.


Prospectus and application form will be available at school office for sale from 17 Oct to18 Nov 2016 on all working days (or) may be downloaded from the school website www.sainikschoolkorukonda.org Downloaded application form may be duly filled and sent alongwith a DD for Rs.475/- for Gen/Def category or Rs.325/- for SC/ST category drawn in favour of „Principal, Sainik School, Korukonda‟ payable at State Bank of India, Sainik School Korukonda Branch, Code No.2791.

Downloaded application forms submitted without the requisite DD will not be accepted.

NOTE: This school does not patronize any coaching institute / agent and the admission will be strictly in accordance with the merit of the candidate based on the marks scored in the Entrance Examination & Interview, subject to medical fitness, approved by competent Medical Board

The Comity of 25 Sainik Schools are premier educational institutions in the country imparting Military oriented education to the Cadets. They are administrated by Sainik Schools Society, Ministry of Defence, New Delhi. These schools are the brain child of Late Pandit Jawaharlal Nehru, the Nation’s first Prime Minister and Late Shri VK Krishna Menon, the then Defence Minister.   The mission of these schools is to prepare the cadets academically, physically and mentally to enter the portals of the National Defence Academy, Pune, and thus encouraging them to don the uniform of the Military Services and carry the arms for the nation. In pursuance of the mission, these schools have set the following objectives.
**** 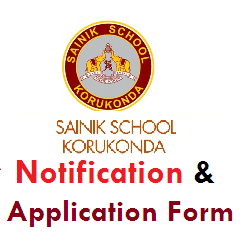